It’s amazing much can happen in a year! On June 12, 2017, our first official Airbnb guest checked in for a night in our third-story guest suite, Inez’s Sweet Retreat. Jason was bicycling the C&O Canal Towpath, and as he left the next morning he promised to bring his wife back here for a visit (which he did in January).

Hosting guests upstairs was a test for us to see how we felt about letting strangers stay in our home – and how Harpers Ferry visitors felt about staying with us. As I wrote in our March post “Surprised by Joy,” it turns out that we love the hospitality business, and the visitors seem to like both the upstairs suite and the newer garden-level space just fine.

As we look back over the past year since Jason’s visit, we are also surprised by how many improvements have been completed around the property. We loved the place when we bought it, but Christian, especially,  is always dreaming up new ways to make it better — better for us and for our guests.   Fortunately, we have had the resources and the access to skilled local tradesmen to bring his plans to life. Sometimes we felt like contractors were slow to respond, renovations were taking forever and weather was holding up outdoor projects beyond reason, but ultimately a lot has changed in the span of 12 months. END_OF_DOCUMENT_TOKEN_TO_BE_REPLACED

We always enjoy hearing about what our guests are up to while they visit here in Harpers Ferry. In case you’re wondering what there is to do,  here is a list of the five things we seem to hear from them most often:

While the history buffs obviously like perusing the National Park Service museums and reading interpretive signs, just about everyone agrees that Harpers Ferry is 360 degrees photogenic. Not only do you have a quaint 19th-century-shop-lined slope leading to John Brown’s Fort, but there’s the natural beauty presented by the confluence of two rivers cutting through the mountains and traversed by rusty train bridges. Shopping and food only enhance the experience. Learn more here. END_OF_DOCUMENT_TOKEN_TO_BE_REPLACED

In April 2017 Christian and I tied the knot under a vine-covered gazebo in our beautiful garden, surrounded by 25 dear family members. The day celebrated our commitment to each other in a partnership that has surprised us by working so well on not only a personal level but on a business level too.

So this month has us thinking about love and marriage even more than usual. Our property – the garden, back deck and sunroom – worked so well for our own small wedding party that we are thinking about opening the place up as a small event venue to others. We’re also thinking, though, about ways our B&B can encourage stronger relationships between couples already together. END_OF_DOCUMENT_TOKEN_TO_BE_REPLACED

It’s no shocker that we enjoy living in our lovely old Harpers Ferry home. Why else would we voluntarily sell our houses in Charlottesville and leave behind jobs, churches, and dearly loved family and friends to move here?  Despite a few (expensive) inconveniences over the past year, we still can’t believe how blessed we are to live in this place.

The thing we did not in any way foresee was the joy that our B&B business would add to our good life together. Maybe we shouldn’t be so surprised, but we are.

Over the past year our B&B vision has evolved through hours of discussion culminating in a little hard work and lots of fun creative thinking. From redecorating the finished third-floor suite last spring to designing and directing construction of the garden-level suite this winter, we have been equally engaged partners every step of the way. (Next up is preparing indoor and outdoor areas for use as a small wedding/event venue!)

We also have fun applying experiences gained over the course of our careers. Christian has a master’s degree in business and spent much of his career working with General Motors’ marketing and sales teams. I’ve spent the past couple decades in the communications field, where I’ve gained expertise as a promotional writer with a few graphic design and photography skills to boot. It’s great to take all that know-how and use it for our very own enterprise. END_OF_DOCUMENT_TOKEN_TO_BE_REPLACED

… So now, students, it is necessary to make use of every moment that comes to us; for while the present is great and grand the future to which we are looking will be more great and grand if we have the determination to make it so.

Knowing something of the times in which he wrote, we are amazed and inspired by the optimism of the young Black man who authored these words as he completed his education at Storer College in 1895. He was William Allen Saunders, age 25 at the time, who later became the original owner of our home. We are excited to share with you what we have learned about him and his wife.

Saunders was born on January 15, 1870, the son of Hezekiah and Louisa (Thompson) Saunders, who were almost certainly recently freed slaves. They lived near the historic town of Louisa, Virginia, along today’s U.S. Route 33. Judging from what we have learned of William’s life, they must have instilled in him a thirst for education along with an incredible capacity for hope.

Saunders arrived in Harpers Ferry to finish his secondary education at Storer in the early 1890s. Shaped by his time in this oasis from the harsh world of Jim Crow laws, he was brimming with confidence about his prospects in spring 1895. As a co-editor of the Storer Record, his writing clearly reflected the character and leadership promoted by the school. In his farewell editorial, he encouraged his fellow students, especially those who were worried that their “great hope of being rewarded” for their academic labors might not be realized due to the “present condition of affairs in the country”: END_OF_DOCUMENT_TOKEN_TO_BE_REPLACED

The New Year started out great for us. January 2 was when the trouble started.

Last year was so good – hard, but exciting as we got married and settled into our newly acquired 1927 stone house in Harpers Ferry.  I knew something had to go wrong before long, though. A fairytale life does not realistically extend ever after.

It was that darn spell of arctic cold that did a number on us. (And please don’t think I am equating our little drama with the recent true tragedies of families who have lost all their possessions and entire homes in mudslides, fires, floods, earthquakes, etc. Our thoughts and prayers are definitely with them!)

Last Tuesday I was de-Christmasing the parlor when I heard an unusual steady drumming sound. I followed the noise to the dining room where I discovered a stream of water gushing through our 1920s chandelier, cascading off the dining table, and seeping through our treasured, timeworn oak floorboards. END_OF_DOCUMENT_TOKEN_TO_BE_REPLACED

Christian and I are so excited to be spending our first Christmas season in Harpers Ferry. We share a love for this season and both brought lots of holiday decorations to the marriage.  Now we are having fun merging our collections and adorning this beautiful house in festive style.

We have an extra special reason to decorate well this year, because we are opening our home to the public during the two weekends of the Harpers Ferry/Bolivar Olde Tyme Christmas. If you would like to visit and enjoy an afternoon Tea Around the Christmas Tree or morning Holiday Brunch, check out the details here.  If you are undecided about visiting, we are sharing some sneak peaks in the blog this week.

To bring some kind of order to all this fun stuff, I decided to decorate (loosely) in themes — a different one for each room: 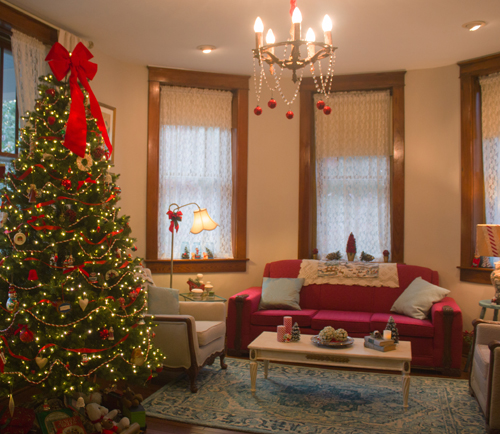 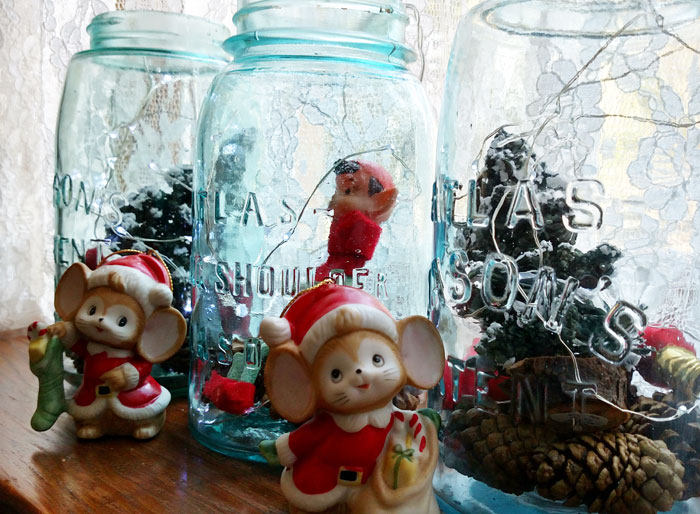 END_OF_DOCUMENT_TOKEN_TO_BE_REPLACED

This being our first year living on a property with an existing mature garden, I have savored every flower and hated to see any of them them just wilt and disappear. I thus embarked on a mission to preserve as many as I could so we could enjoy them inside through the winter months.

I had dried hydrangeas a couple of times in the past, and I love the look when they’re done right. Since the Rockhkaven garden has an abundant supply of hydrangeas, I focused my attention on them first. How do you like the wreath I made with a grapevine wreath base? So easy! I just kept adding blooms as they were ready until I filled in all the holes.

Then, I got a little obsessed and tried to save every bloom I could. No bloom left behind, you know! At some point I think Christian was a little worried that the house would be overrun with them. They’re so pretty though! END_OF_DOCUMENT_TOKEN_TO_BE_REPLACED

We first laid eyes on this house and its lovely gardens approximately one year ago when the real estate agent showed us around the property. When we returned in late fall for the inspection, we identified some dogwood and a few other plants from their leaves, but other than that we knew very little about what garden would look like in full bloom.

Let me tell you, this garden did not disappoint.  The daily discoveries were pure joy!

As we draw to the end of the growing season, we thought it would be fun to share with you a review of what we found blooming here. These photos are just the tip of the iceberg. We could fill up the web with them, but we’ll try to be selective.

We’ll begin with April, just before our garden wedding, and take you through summer to the present: END_OF_DOCUMENT_TOKEN_TO_BE_REPLACED

We probably are no different from most other middle income couples who remarry in their empty-nester years. Christian and I both owned homes, and we both accumulated way too much stuff during our separate family-raising decades. Some of it is easy to part with, but a lot of our furniture and décor either comes with some kind of emotional attachment or cost us too much to just yard-sale it or give it away.

Thus, deciding to buy the house and move to Harpers Ferry was the easy part. The harder part has been merging Christian’s more traditional style (leaning modern) and my more vintage style (leaning cottage) into a single 1920s craftsman-style house.

Neither of us have ever lived in a home more than 40 years old, and a lot of our stuff in its current state doesn’t fit the the style of this place. Our challenge has been to repurpose – or reinvent – as much of it as possible. The attic guest suite has been our first achievement of this goal. END_OF_DOCUMENT_TOKEN_TO_BE_REPLACED

Wow! We just added these succulents to the urn pla

It's starting to look like a party out in the gard

Big shoutout to Candice and her local business @gr

Here we go! I've been waiting for daysss for these

Our #studebaker suite is full of sweet amenities a

Another magical evening here in the Rockhaven Gard

You can enjoy the most romantic dining spot in Har

A private cabana just outside the Studebaker Suite

Today has been a perfect day to find your zen here

We have great guest suites here, but it's almost l

Finally got some foxglove growing along the path t

Your personal celebration spot ... one of several

Have a safe and fun holiday weekend from us here a

Thanks for the mention @wvweddingsmag! What a wond

It was a hot one today, but the cool green garden

Those roses are loving their new location outside

The garden beckons you outside after a long day of